Get fresh music recommendations delivered to your inbox every Friday.
We've updated our Terms of Use. You can review the changes here.

by Tony Savarino and The Savtones 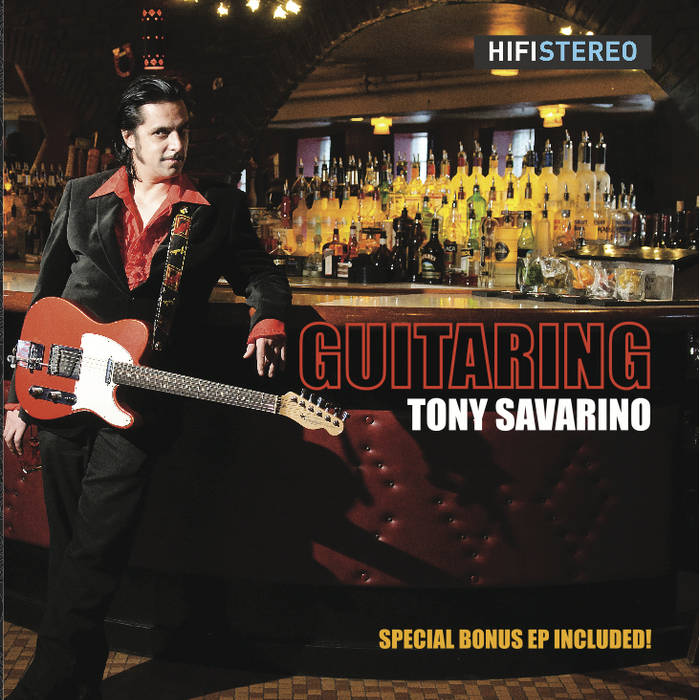 Collection of Desert island Music ranging from, Jazz to lounge to country to blues.

Browsing bandcamp.com, this track title caught my eye (& why wouldn’t it)? It’s a Danny Gatton-style romp worthy of the name, but the cool thing about Guitaring by Tony Savarino is the impressive variety of styles, everything from the above track to jazz (Take One & Blues for Bb), country (Freight Train), and new age-y Deep Blue Day.

Tony is based in Boston and, based on his website, does session work and teaches. He also has a pretty impressive collection of axes.

Guitaring Review by by Dan MacIntosh

Tony Savarino’s Guitaring is a guitar lover’s dream CD, on which Savarino gives listeners a tour of many (mostly) American guitar styles throughout the ages. While this disc is all over the map stylistically, Savarino never sounds like he’s showing off. He doesn’t seem to be saying, ‘Hey everybody! Look at me!’ Instead, he tastefully displays a mastery of too many different guitar techniques to count.

You want country picking? You’ve got it with “Barrelhaus Gutbucket Chicken Picken”. You prefer jazz, instead? Well, look no further than “Take One”. Okay, how about something obscure, like a spy movie theme? If that’s you’re taste, “Russian Roulette” conjures up vividmental pictures of old 007 chasing after Eastern European bad guys. Savarino doesn’t just hint at generalized styles, either. For instance, the country of “Barrelhaus Gutbucket Chicken Picken” has a chugging train, country vibe one would mainly associate with Johnny Cash. And “Take One” is not merely jazzy; it’s jazzy in a Modern Jazz Quartet way because of its swinging vibe part. Just as Savarino plays off the vibraphonist on “Take One,” he spars with an organist during “Blues for Bb (B flat)”. “Holiday for Strings” has one of those corny song titles you might expect to see in a guitar instruction book, but this is no rudimentary practice exercise. Rather, it finds Savarino playing clipped notes that resemble a popcorn popper, and in a Les/Ford style.

This musician appears to be most comfortable with an electric instrument in his hands. Yet he unplugs briefly during “Freight Train” where he shows off his equally developed folk/bluegrass picking skills. Then on “Deep Blue Day,” he stretches out with a quiet, atmospheric track. Savarino really reveals his interpretative skills on “Jericho”, which uses on old spiritual as its jumping off point. There is a female vocal during “Christine’s Tune,” which is also known as “Devil in Disguise”. This is an old Gram Parsons/The Flying Burrito Brothers song, and while Savarino’s version is credible, it won’t soon make you forget the original.

Savarino also earns bonus points for giving his CD such a great title. Any time an artist has the guts to make up a brand new word, that artist deserves extra kudos. Savarino is not just picking at a guitar; he’s guitaring it, the way a driver drives his car. In other words, he sounds to be incomplete control throughout.

Chances are that genuine guitar geeks love to hear all Savarino can do. But Guitaring is not just a series of technique exercises masquerading as songs. This album is extremely entertaining,too. When Savarino gets down on the farm for “Early American,” he never strays far from the central melody. So while he’s an amazing picker, he’s not just showing off how many notes he can squeeze into each measure. In that sense, he’s a lot like Chet Atkins. Savarino’s style is distinctly different from the flashy heavy metal axmen that have tragically turned guitar playing into the musical equivalent to skateboard tricks. Most of the time, listeners want a song they can hum along with and tap their toes to, which is uniquely difficulty when a soloist is shredding like a speed freak. Shredders can make you a little nervous; great musicians, like Savarino, amaze you while they make you feel good.However you choose to look at it, Tony Savarino’s Guitaring is an instrumental musical treat. You can play this for your mom, and your teen boy, and both will likely end up entertained. Yes, Tony Savarino’s Guitaring has a very rare wide appeal going for it.﻿

I am not sure how many of you are with me here, but I can’t see the name “Tony Savarino” without instantly hearing John Powhida wailing the name in my mind, to the tune of The Rudds song “Tony Savarino.” I imagine Ashley is, but I am not sure how many of the rest of you can dig dig it. I also remember when he was my friend Patrick’s guitar teacher a long time ago. He (Tony, not Patrick) is now apparently being managed by Darth Sideous. It makes sense, because this Savarino has many abilities, some considered to be …unnatural. He will display his dark powers (of guitar playing, anyway) tonight at Pine Manor College on Chestnut Hill. So go on, head over, get Sithy and enjoy the show.

When you hear the name “Tony Savarino,” you probably have one of two Wayne’s World-esque thoughts about the man. You probably end up somewhere between “I hear he wails,” and “That dude can shred.” You would be right on both counts, but “Barrelhaus Gutbucket Chicken Pickin” shows another side to the local string-slinger. This track bumps and dances all over itself, its plucked strings running up up and down the scale in a manner that would seem almost arbitrary if every single little interval wasn’t so damned catchy

“Barrelhaus Gutbucket Chicken PIckin” isn’t just hard to say (or type, for that matter), but it doesn’t sound like a walk in the park to play on the ole guitar either. We are guessing this would top out somewhere around the 5-red-devil-heads difficulty in Rock Band, where things get really impossible. Savarino, as usual, makes the seemingly impossible possible, working what sounds like a six-fingered right hand attack, alternately plucking and hitting the strings with nary a muffled or misfired note.

Of the multiple words in the title, “Chicken Pickin” seems to be the operative phrase here: the melody is rangy and wild as a pile of straw, with little colorful offshoots here and there. The multi-note sections are impressive, as Savarino picks out odd little combinations of strings that, fretted just right (and of course he’s fretting them just right - he’s Tony Eff-ing Savarino, kids) make up deliciously crazy little intervals. “Barrelhaus Gutbucket Chicken Pickin” is exactly what the title makes it sound like, and you are going to like this.﻿

Wait. What? What the hell is this. I mean seriously. I am not sure what to say but damn, I like it. As the title suggests, this is a instrumental album featuring the guitar. It ranges in style from jazz, to blues to country. This is exactly the type of album I want in my car on a cross country trip, or playing loud at my outside BBQ, or when I'm making sweet love to... well maybe not then, I would be paying too much attention to the music.Tony is the front man but he is not selfish, he leaves room for the other musicians to shine. Unlike most guitarists that record an album of music, this record is not just a "hey listen to me play the guitar for an entire album over and over cause I am awesome." (I'm looking at you Santana!). Tony's technical prowess on his guitar is awe-inspiring but he does not let that get in the way of making great music; he uses his talent to serve the song and not show off (again, looking at you Carlos). The song "Freight Train" leaves no question that Tony has the chops not only on the side of his face but on his guitar too.(rob, yourbandinfo.com)

Tony Savarino has been a guitar-slinging gun for hire for so many years in this city, it is hard to think of a band he hasn’t played in or sat in with. This solo record is a joyful mélange of diverse styles: blues, jazz, rockabilly, lounge, country, rock… this is nothing less than a loving tribute and salute to guitar picking that would make lovers of Chet Atkins, Steve Howe, Les Paul, Grant Green, and Roy Clark squeal with glee. It’s rare that a guitar album makes so many stylistic statements within one album and yet still remains fresh and interesting to so many sets of ears. Listen for a cameo by Ajda the Turkish Queen serving up her best Emmylou Harris in a classic Gram Parsons tune, followed by a secret track that will blow your speakers off the table! Rock on! (Joel Simches, The Noise)

Bandcamp Daily  your guide to the world of Bandcamp

Quelle Chris joins the show to discuss his most recent release, "DEATHFAME"